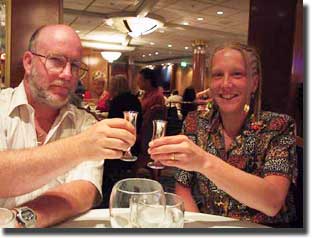 DENNIS - BOSTON: I was aged forty and working in Boston when affected by gentamicin. I still work for the same company sitting in front of a computer all day for production control. I stepped on a nail in the outdoors on the 1st September 1996. It was a Sunday and I cleaned the wound with just soap and water which proved to be a big mistake. The following Tuesday I drove myself to the emergency room at 2.00 am as the foot was throbbing. A doctor lanced the wound with a scalpel (very painful, I threatened to kick him if he did it again) and was then prescribed a 400mg daily regime of gentamicin.

An operation on my foot was scheduled for the Thursday of the same week and seven days later I was sent home with an IV and a visiting nurse came daily to administer 400mg gentamicin and 100mg primaxim. Following a review by the doctor on the 16th September it was decided that the nail may have grazed the bone so I went back for more surgery on the 18th.

This time about three quarters of the bone in the second smallest toe, (from the toe tip to the first knuckle I guess you'd call it) was removed. Gentamicin was continued. The second operation had cut a hole in my foot that you could see through, for it to heal they had to stuff it from both sides with what looked to be miles of medicated shoe laces and each time it caused a great deal of pain. After a very uncomfortable weekend at the hospital I was sent home with the IV.

This time they had trained me to do administer the drug myself with the visiting nurse coming in every other day to take blood to test levels and such. So from the 27th of September until the 7th of November I gave myself 400mg of gentamicin and 100mg of primaxim with the visiting nurse coming in every other day. It was not without incident. The peripherally inserted central catheter could only be left in for six weeks so it was during that period the nurse came in to change it. I was on the couch not looking while it was done (she was new) when I realized she had become very quiet. When I looked over her eyes were in a panic and her brand new white lab coat was completely red with my blood. I started to laugh but suddenly found a greater need to help her and managed to squeeze the artery shut while she recovered long enough to get the new line in place.

Anyway, a couple of weeks later, on the 4th of November I told the nurse that I was feeling funny and was having difficulty standing up straight. She said I should inform the doctor right away, so while she was there I phoned him. He convinced me to continue the course of gentamicin, I was not to worry and he would look at the vertigo on Thursday the 7th which was when my next follow up was scheduled.

The drive that day was horrendous as I was still unaware of what was happening. When my doctor asked how the vertigo was I said that could not stand upright and he consulted a senior surgeon in the same offices. He had left the door open and I heard his colleague tell him to “get him off the gentamicin”. That is when I knew it was the drug and that was the last time I followed a doctor's orders without question. It was a year or so later I saw Lynn interviewed on TV, hooked up with Wobblers and found a community I could learn from and share with.